The day before yesterday, I was returning from our mailbox with my two little dogs on leash, and was greeted by a fox in my front yard.  He looked very scrawny and not too healthy, and my first concern was rabies.  My dogs had their shots, but what about me?

The fox didn't run, and just stood there, staring at me.  Oh, gee, not a good sign.  It was only when I yelled at my dog to stop lunging, that the fox turned and ran.

The fox came back yesterday, and was munching on apples that had fallen from our trees in the back yard.  I immediately grabbed my camera, hoping to get some beautiful photos, only to realize that the fox was not just scrawny, he was terribly sick!  The poor little guy was covered in mange, and just miserable--scratching constantly, with sores all over, and skin that looked like a leper.  His eyes were swollen shut, and that's when I realized why he hadn't run away the day before, even though I was right in front of him.  He couldn't see me! 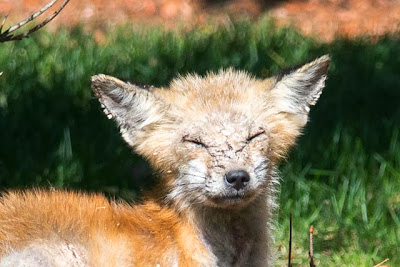 I searched the internet, and found a few places that would rescue him.  This WEBSITE for the Tufts Wildlife Medical Program showed a heartwarming story of the rescue and rehab of a little fox that looked just like mine.  (Yes, I think of him as "mine" now.)  I called Tufts this morning and spoke to a wonderful girl who was extremely helpful, knowledgeable, and sympathetic.

When a fox gets mange, the itch is terrible, and they lose much of their heavy coat.  Now that our nights are getting colder, he could die of hypothermia without treatment.

He stayed around nearly all afternoon, eating apples... 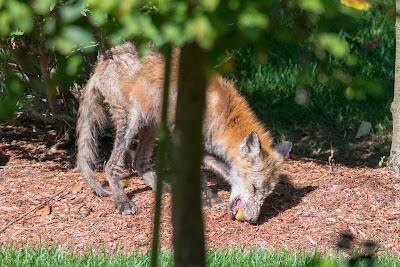 and trying to keep warm in the sun. 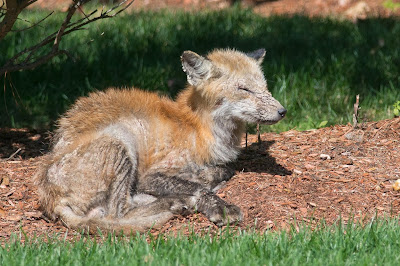 Notice that his eyes are nearly completely shut.  This means that he can't hunt, and has to hope there's something on the ground that he can eat that won't run away! 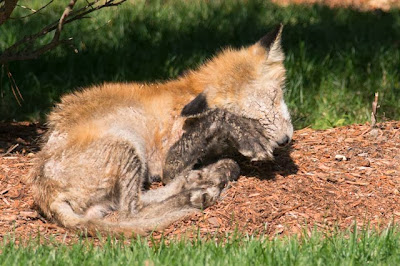 Look at those big paws!  He hasn't grown into them yet.  He must be young.

Finally, he curled up and went to sleep... 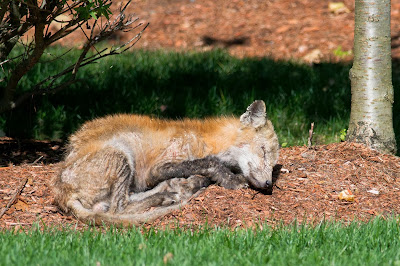 The people at Tufts asked me to keep a lookout for him, and if he comes back, they'll try and get him.  Maybe he'll be their next success story!  I hope so!

My book, "The Wild Side of Paradise," about birds in our wetlands

Jean Chang
Massachusetts, United States
Although I have a full-time job as a healthcare executive, my time off finds me hurrying to my passion of photography and art. I especially love to wander around the wetlands of my home and search for birds, flowers, and wildlife to photograph, to sketch, or to paint. For more information, please explore my website: HERE